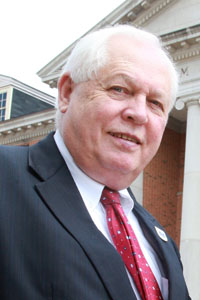 William Propst graduated from Samford University School of Pharmacy in 1961, and began his career at Walgreens. Two years later, he opened his own store in Huntsville, Alabama. In 1968, he convinced K Mart management that pharmacy had a place of profitability and prominence in the realm of department store/mass merchandising business. This effort resulted in the creation of over 1200 K-Mart in store pharmacies across America. Mr. Propst career moved into the pharmaceutical manufacturing and distribution industry, resulting in substantial innovations and providing lower cost, more affordable generic drugs. Qualitest, his pharmaceutical manufacturing company, became one of the top ten manufacturers of generic drugs in America.

Mr. Propst personal success has benefitted numerous philanthropic organizations in the arts and education, most notably major gifts to build the Science Center, establish a pharmaceutics laboratory and create a Pharmacy Teacher of the Year Award at Samford University, Mr. Propst has served on the McWhorter School of Pharmacy Dean’s Advisory Board for more than 15 years and was named National Alumnus of the Year in 1996.