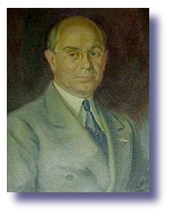 Born in Cedartown, Georgia, and awarded a medical degree from the University of Virginia in 1894, Dr. Harris initially established a medical practice in Union Springs, Alabama. After the completion of postgraduate studies at Johns Hopkins University, Dr. Harris accepted the position of Professor of Clinical Medicine at the Medical College of Alabama in Mobile. With the advent of World War I, and with a commission of Major in the Medical Corps of the U.S. Army, Dr. Harris was assigned to the staff of General William Crawford Gorgas. While serving overseas he was decorated for meritorious service by General John J. Pershing.

Returning to private practice in Birmingham, Dr. Harris was instrumental in building the 50-bed “Gorgas Hospital Hotel” which later became Montclair Baptist Medical Center. A prolific author and contributor to medical literature, in 1949 Dr. Harris was awarded the American Medical Association’s Distinguished Service Medal for his research in hyperinsulinism. He was instrumental in establishing a camp near Mobile for children with diabetes, and in tribute to his life and work, it was later designated “Camp Seale Harris.”