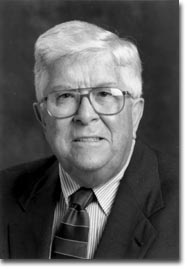 “Rush” Jordan’s career as a healthcare executive and educator spans over forty years. He is distinguished as a leader who helped pioneer the development of integrated healthcare delivery systems, and as a mentor whose wisdom and guidance have benefited hundreds of young healthcare executives. Mr. Jordan began his career as an assistant professor of hospital management at Duke University Medical Center. Mr. Jordan’s tenure as CEO of Birmingham Baptist Hospitals began in 1965, where he helped lay the foundation for what is today the Baptist Health System. There he oversaw the development of a multi-unit hospital system including the construction of Baptist Montclair Medical Center.

From 1974 to 1978 he served as president of Alton Ochsner Medical Foundation in New Orleans. Since his retirement in 1987, Mr. Jordan has served as Professor of Health Services Administration at UAB and was honored with the establishment of the L.R. Jordan Endowed Chair in Health Sciences Administration.