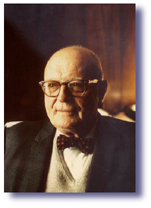 Dr. Robert Parker was born in Newnan, Georgia in 1902, and later received his medical degree from Vanderbilt University. He served as an Army Flight Surgeon and was discharged as a Colonel. Serving as a practicing physician in Montgomery for 45 years and as a Chief of Staff St. Margaret’s Hospital, Dr. Parker always referred to himself as “just a doctor.” But as a doctor-citizen his work for his fellow man far transcended his profession. Dr. Parker made significant contributions to the mental health field serving as Chairman of the Alabama State Department of Mental Health. He persuaded the Governor to visit all mental health facilities and he provided leadership in the development of state regional health centers.

His civic work was legion. Dr. Parker served the Jr. League Charity Clinic for 35 years and served in leadership roles of the Board of Education, United Appeal, YMCA, and the Children’s Center. He received the A.H. Robbins Award for Outstanding Community Service by a physician and was selected as “Montgomery Man of The Year” for YMCA camp development work. May 7, 1973 was declared “Bob Parker Day” by the Governor of Alabama.