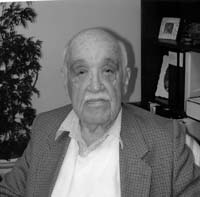 Dr. Joseph Cunningham is one of Alabama’s most distinguished pathologists. He is respected by his colleagues for his integrity, diagnostic acumen, perceptive intellect, and striking demeanor.
A native of New York City, he received advanced degrees at the University of Munich, the University of Heidelberg, and the University of Freiburg in Breisgau, Germany, where he received his MD degree. After receiving further training in Boston, in 1942 Dr. Cunningham entered private practice in Birmingham and founded Cunningham Pathology Services, which is now Roche Biomedical Services.

He was very involved with the initiation of pathology services in the area including Hillman Hospital, which was noted for its variety and volume of pathology. In 1953 Dr. Cunningham accepted an appointment to the faculty of the University of Alabama where for many years he served as a Professor of Pathology. Over the years he has established an impressive publication record, served as president of the Alabama Chapter of the American Cancer Society, and served as staff president of St. Vincent’s Hospital in Birmingham.