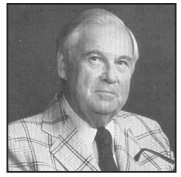 Dr. John Day Peake was a native of Rocky Mount, Virginia, and a graduate of the University of Virginia College of Medicine. After completing post-graduate work at Lloyd Noland Hospital, Dr. Peake became the first radiation oncologist in Mobile. He was chairman of the Mobile Infirmary Hospital’s Department of Radiology for forty seven years and served as vice chairman of the American College of Radiology. He was made a fellow of the American College of Radiology and later received “Fellow Emeritus” status from the organization.

Dr. Peake gave exemplary service to the American Cancer Society. He served on the national Board of Directors, founded the Mobile chapter, and served as president of the Alabama Division for twenty years. During his last thirty years of practice he specialized in the treatment of cancer. In his honor, the Mobile Infirmary radiologists have endowed the John Day Peake Scholarship fund for young technologists.