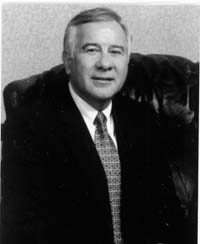 James Garland joined the staff of the University of Alabama at Birmingham in 1974 as Director of Architecture and Engineering. Today he is known as the state’s most outstanding health facility planner and architect. For more than thirty years he has played a key role in the design and construction of many healthcare buildings at UAB. The capitalization for facilities during his tenure has exceeded one billion dollars. The latest buildings completed under his tenure include the Kaul Building and University Hospital’s new North Pavilion. The Shelby Interdisciplinary Biomedical Research Building, one of the largest buildings on campus, was dedicated in April. University Hospital’s new North Pavilion addition is recognized as one of the most outstanding healthcare facilities in the country. It is especially known for efficient management of people with acute care needs and for its unsurpassed intensive care units.