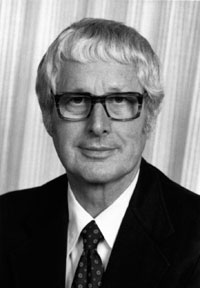 Dr. Henry Peters, a native of Oakland, CA, was a leader in optometric education and vision research after receiving the BA and OD degrees at the University of California at Berkeley and the MA degree at the University of Nebraska at Lincoln. He was in private practice after WWII service in the Pacific as a Naval radar officer on destroyers. He was recruited in 1969 to UAB where he was founding dean of the School of Optometry, the first to be associated with an academic medical center. The school gained national prominence for its unique curriculum, excellent clinical and research faculty, and high standards for its programs. He established the first optometry education and clinical training programs affiliated with a Veterans Administration Hospital and first graduate program in vision research in Alabama. Through his leadership, insight and guidance the School of Optometry became an integral part of the medical center and UAB.

He was the founding Director of the UAB Research Foundation after his retirement from the deanship in 1986. He was the author of more than 100 articles, papers, and editorials. He brought recognition to Alabama through leadership in the Association of Schools and Colleges of Optometry, National Board of Examiners in Optometry, AMA, American Academy of Optometry, American and Alabama Optometric Associations, and the National Health Council.