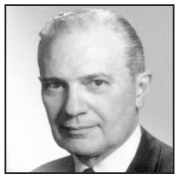 A native of Anniston, Alabama, Dr .J. Garber Galbraith was a renowned neurosurgeon, a stalwart in organized medicine, and a mentor to many. Dr Galbraith received his medical degree from St. Louis University, then completed his general surgery residency at Lloyd Noland Hospital and his neurological surgery residency at New York Neurology Institute and Columbia Presbyterian Medical Center. In 1954 he was appointed Professor and Director of Neurosurgery at the Medical College of Alabama. Dr. Galbraith is known not only for his clinical expertise, but also for his leadership abilities.