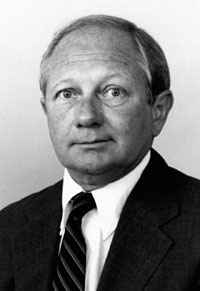 Dr. William F. Bridgers had a distinguished career in multiple roles across diverse fields of healthcare. He was recruited to UAB in 1968 to develop a neuroscience program in the School of Medicine and in 1976 was appointed chair of what was then an interdepartmental program in neurosciences, a forerunner of a Department of Public Health, and ultimately the School of Public Health. He was named founding dean of the newly formed UAB School of Public Health in 1979. Dr. Bridgers was a healthcare pioneer known for his foresight and advocacy in public health. During his tenure, The John Sparkman Center for International Public Health Education and The Lister Hill Center for Public Health were established. He was an advocate for people needing health care, and authored a widely cited book, “Healthcare Reform: The Dilemma and a Pathway for the Healthcare System.”