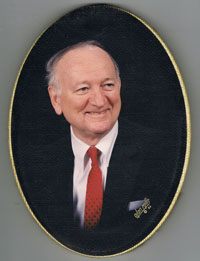 Dr. Richard O. Rutland Jr., a native of Eufaula, Al. began his medical career as a Navy medical officer in both the Pacific and Korean Theaters. Following discharge, Dr. Rutland completed his residency and established his medical practice in 1954 in Fayette, AL., where he worked tirelessly until his retirement at the age of 82. Dr. Rutland served as President of the Alabama chapter of the American Academy of Family Medicine in 1961.

He was deeply involved in the development of the Family Practice program in Tuscaloosa and recruitment of its first dean. He also served as it’s first Director from 1973 to 1975. Dr. Rutland has received numerous awards including being named as National Family Doctor of the Year in 1981, receiving the Rural Health Provider Exceptional Achievement Award in 2003, the Sage Award in 2005 and the Paul W. Burleson Award in 2006. In addition to his private practice, Dr Rutland has had significant involvement in both his church and civic affairs. Dr Rutland may be best known for his compassionate care for his patients, and teaching residents, not just the science of medicine, but the art of caring for patients and their families.