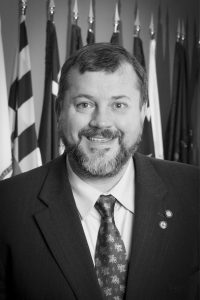 Dr. Michael D. Hogue received his Bachelor of Science and Doctor of Pharmacy degrees from Samford University. He completed a post-doctoral executive residency with the American Pharmacists Association (APhA), Washington, DC. A native of Southern Illinois, Dr. Hogue has held many leadership positions in the pharmacy profession. He has served on many committees and as Speaker of the House, Board Member, and Pharmacy Practice Academy Chair for the Alabama Pharmacy Association. He has served as national president of the APhA Academy of Student Pharmacists, and APhA’s Academy of Pharmacy Practice and Management. He is the 2017-2018 Speaker of the House of Delegates for APhA, the profession’s policy-making body. He will assume the office of President-elect of APhA in 2019, and will become the Association’s 165th President in 2020. He is the first APhA president to have served as president of two of APhA’s three Academies and Speaker of the House, and is only the second pharmacist from Alabama to serve as APhA’s president. Dr. Hogue is most well-known for his role in immunization practice, having served on the development team for the pharmacy profession’s advocacy and education campaign to improve immunization rates in the U.S. Hundreds of thousands of pharmacists, student pharmacists, advanced practice nurses, nurses, physicians, and others have been educated by Dr. Hogue or as a direct result of the programs he has had a hand in creating; impacting millions of patients who have thus been immunized by pharmacists who would have otherwise been unprotected. He is a past board member of the National Foundation for Infectious Diseases. Dr. Hogue and those in his Albertville practice were the first pharmacists in Alabama known to routinely immunize patients. In addition to his work in pharmacy, he has served on a city school board and actively serves in his church in his family’s current home of Gardendale.