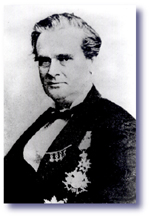 The breadth of Dr. Marion Sims 19th century career spans the American and European continents, where he was dedicated to the improvements of women’s health. He created the science of gynecology, invented the duck-billed speculum and other instruments to properly examine the female organs, and was the first to use silver wire instead of silk sutures in surgical cases.

As a young doctor he practiced in Mt. Meigs and in Montgomery from 1835 to 1853, and was the first southern physician to successfully operate on club foot, and the first man to operate for cross-eyes. He discovered a surgical cure for vesico-vaginal fistula and maintained at his own expense a hospital where negro women slaves with this horrible condition were treated. Moving to New York in 1852 he founded a woman’s hospital for rich and poor alike. Dr. Sims lived abroad most of the time from 1861 until the early 1870’s and had lucrative practices in Paris and London. After his return to this country he was elected president of the American Medical Association.