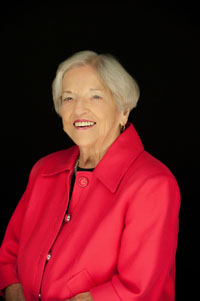 In her life and career, Ruth Harrell has demonstrated a commitment to improving the health and lives of her fellow citizens. Ruth’s numerous honors include the Ira Myers Award for Excellence in Public Health (1994); the Alabama Nursing Hall of Fame (2003); Alabama Public Health Association Hall of Fame (2008); and Alumnus of the Year UAB School of Public Health (2009). The Chamber of Commerce named her the Flomaton, Alabama Citizen of the Year (1997). In Public Health, she held numerous positions before becoming Staff Assistant for Professional Services, the Director of Public Health Nursing for Alabama, and the Home Care Services Supervisor for Escambia County. Ruth utilized her leadership skills as practice consultant for the Alabama Board of Nursing and Interim Executive Director for the Alabama State Nurses’ Association (1999).

She served two terms as president of ASNA (1994 and 1996), two as President of the Voices for Alabama’s Children (2004 and 2005), President of the Alabama Public Health Association, and President of the National Association of State and Territorial Directors of Nursing (1993-94) and nine years as Elected Employee Representative on the Alabama State Personnel Board. Lastly, in her work with Dr. Will Baker and AMEC, she addressed the primary care physician shortage by helping to establish two schools of Osteopathy in Alabama. Ruth Harrell is an outstanding nursing leader who has brought distinction to her profession and to Alabama.