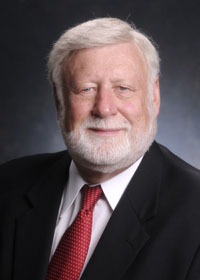 Robert C. Chapman has distinguished himself as one of Alabama’s foremost leaders in healthcare administration. His career began at Birmingham’s East End Memorial Hospital after receiving his Masters in Healthcare Administration from UAB in 1972. In 1985 he was named President and CEO of Medical Center East and successor, Eastern Health Systems. Beyond his career at EHS, Mr. Chapman has been one of Alabama’s most visible and influential healthcare leaders. He held every officer position at the Alabama Hospital Association including Chairman of the Board. On a national level, Bob has held leadership positions at the American Hospital Association and the American College of Healthcare Executives. Mr. Chapman has also served on the Board of Directors of Blue Cross Blue Shield of Alabama and Coastal Insurance Group of Alabama among others.

He has been active in numerous church, civic and business organizations. Mr. Chapman was awarded the Alabama Hospital Association’s Gold Medal of Excellence in1987 and the distinguished service Award in 2006. He also received the ACHE Executive Regents Award in 1992 and was named Administrator of the Year in 1996. Mr. Chapman retired in 2007, but continues to serve as Adjunct Professor at UAB.