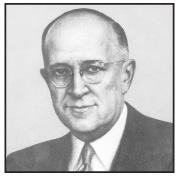 A 1902 graduate of Atlanta Dental College, Dr. Kirkland was a pioneer in the field of periodontics. He was the first Alabama dentist and one of the first in the nation to limit his practice to this specialty. Known as an innovator of periodontal surgery techniques, a designer of widely used instruments, an author and a teacher, he was also an eminently successful private practitioner. He served as president of both the Alabama Dental Association and the American Academy of Periodontology.

In 1950, Dr. Kirkland was elected “Man of the Mid-Century” by the Alabama Dental Association, designating him as the century’s most outstanding dentist. He was educated at a time when most dentists closely guarded their reasons for professional success; nothing gave him greater pleasure than to share his knowledge. Dr. Kirkland did this informally with scores of young dentists and more formally by teaching at Emory University, Tufts University, and the University of Alabama.