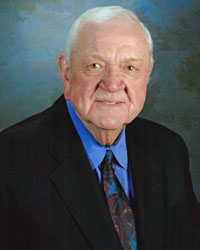 M. Lloyd Sellers graduated from the Samford University McWhorter School of pharmacy after receiving a B. S. degree from Georgia State College. After an active military career he practiced as a pharmacy owner and pharmacist in Opp Alabama. He has been involved actively in his community, serving in several capacities with the school system, Chamber of Commerce, Lion’s Club, and the Covington County Cancer Society. He has received the Bowl of Hygeia, the Alabama Pharmacy Association’s highest award for his community service for which he was recognized nationally.

His most important contribution came prior to his pharmacy practice which was his service with the CDC in developing Polio vaccine. As a virologist he worked with Drs. Jonas Salk and Albert Sabin on a team in the Viral and Rickettsial Division on prevention strategies. He performed numerous microbiologic analysis which would later result in the development of the vaccines and worldwide reduction of Polio which is now controlled in all but 2 or 3 countries in the world. As a pharmacy student after leaving the CDC, and working with the Jefferson County Health department, he assembled a group of pharmacy students from Samford to work with the health department going into schools and administering oral polio vaccine to children. He continues to practice as a pharmacist in Opp, Alabama.