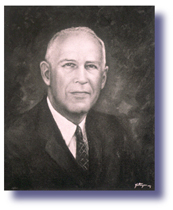 The son of pioneer surgeon Dr. L.L. Hill, Lister Hill devoted his life to public service, and demonstrated over the span of a salutary career both concern and action to help persons and communities in need of better health care. A Phi Beta Kappa graduate of the University of Alabama in 1914, he was elected to Congress from Montgomery in 1923. He would serve 15 years in the House and 31 more years in the Senate.

His legendary achievements include the following: he created the Comprehensive Health Planning and Public Health Services Planning Act; developed the Hill-Burton Act through which more than 8,000 hospitals and other medical facilities were built; sponsored legislation creating the National Library of Medicine and the Medical Library Assistance Act of 1965, which provided funds for improving medical libraries nationwide. Congress honored Sen. Hill in 1968 by establishing, as part of the National Library of Medicine, the Lister Hill National Center for Biomedical Communications to Develop ways to improve the transfer of medical information. The Health Science Library at UAB is named in honor of Senator Lister Hill.