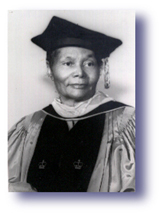 Dr. Lillian Harvey was Dean of the Tuskegee (Institute) University School of Nursing for almost three decades. Under her leadership and untiring efforts, the School of Nursing at Tuskegee became the first to offer a Bachelor of Science degree in nursing in the state of Alabama. Dr. Harvey was credited with being a crusader for unrestricted professional recognition across the state and nation. She weathered the difficult times of racial discrimination and segregation during the 1940’s.

Among her many honors were the Award for Distinguished Achievement in Nursing and the American Nurses’ Association Mary Mahoney Award; The Alabama State Nurses’ Association established the annual Lillian Holland Harvey Award in her honor. In 1992, the Tuskegee University Board of Trustees approved the recommendation of the president to rename the Nurses Home in honor of Dr. Harvey. The Nurses Home is now named “Lillian Holland Harvey Hall.”