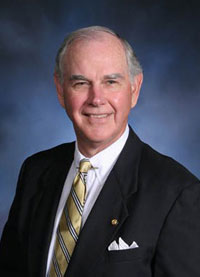 Larry Dixon came to Alabama, following 3 years in the U S Army and completion of his undergraduate and graduate degrees at Washington State University. Mr. Dixon’s early career includes developing the continuing medical education program for the Medical Association of the State of Alabama (MASA), Administrator of the Montgomery Family Practice Program and Executive Director of the Jackson Hospital Foundation. In 1981, Mr. Dixon was hired as Executive Director of the Alabama Board of Medical Examiners where he has served since that date. Mr. Dixon has served four different terms on the U.S. Federation of State Medical Boards (FSMB), and Mr. Dixon was the first President of the Administrators in Medicine (AIM), an organization he help charter. Throughout the years, he has served on committees of both AIM and FSMB.

Mr. Dixon career also included politics. Mr. Dixon served terms on the Montgomery City Council, the Alabama House of Representatives and concluded with 28 years in the Alabama Senate where he was well recognized for his knowledge of health related issues and legislation. Mr. Dixon was awarded the Doug Cerf Executive Director’s award and in 2009 he received the “Meritorious Service Award” from FSMB and in 2014 FSMB awarded Mr. Dixon the “Lifetime Achievement Award.” Mr. Dixon was most recently honored by the renaming of the Medical Association building to the Dixon-Parker Building.