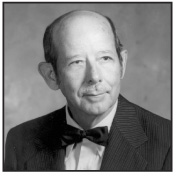 Dr. Kermit Pitt served North Alabama as a pediatrician for over fifty years. In 2001 his extraordinary career was recognized when Decatur General Hospital named its new Pediatric Center in his honor. Dr. Pitt received his medical degree at Tulane University and did post-graduate work at the Denver and Dallas Children’s Hospitals. He was the first pediatrician in North Alabama to be Board Certified. He was the first physician in Alabama to treat a patient that survived tuberculous meningitis; the first to perform a Ramstedt operation on pyloric stenosis on an infant; and the first to do an exchange transfusion for erythroblastosis on an infant.

Professional activities include serving as president of the Medical Association of the State of Alabama, president of the Alabama Pediatric Society, and as staff president of Decatur General Hospital. Dr. Pitt further distinguished himself by receiving the Wallace Clyde Distinguished Service Award and the Samuel Buford Word Award for Outstanding Service to Humanity.