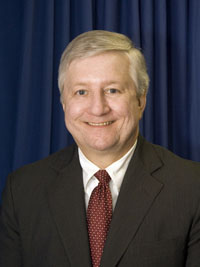 Judge James Allen Main, a lifelong Alabamian, currently serves as a Justice on the Supreme Court of the State of Alabama.. A pharmacist and lawyer, Judge Main has distinguished himself in both fields. His life is one of service and commitment evidenced by his dedication to individual persons, his community and the State of Alabama with professional accomplishments nationally in both pharmacy and law. Judge Main is a two term past-President of the American Pharmacists Association, past-Chairman of the Dean’s Council for the Auburn School of Pharmacy and a past member of the Alabama Commission on Higher Education.

He has received numerous awards, including the Parke Davis Leadership Award; the Bowl of Hygeia, the most widely recognized international symbol for the profession of pharmacy today; the Distinguished Alumnus Award from Auburn University School of Pharmacy; the Parke-Davis Leadership Award; the Distinguished Alumnus Award from Auburn University’s Harrison School of Pharmacy; and the President’s Award from the American Society of Pharmacy and Law. He has long served on various local and state boards and commissions including cabinet positions under two Alabama governors.