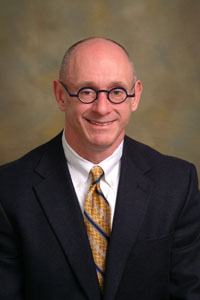 Dr. James L. Raper came to Alabama after receiving his BS in Nursing and obtained his Masters and Doctorate degrees in Nursing and completed the Nurse Practitioner program. In 2003, Dr. Raper received a Juris Doctorate Degree from the Birmingham School of Law. As both a researcher and clinician, his career has been focused on the care and treatment of patients with HIV/Aids. Dr. Raper has set the standard of care through the development of evidenced – based models of care delivery to address the many challenges common among HIV positive individuals.

His extensive list of publications have gained him national recognition for his research and development of advance nursing practice concepts. Dr. Raper is currently Associate Professor of Medicine at the University of Alabama School of Medicine and Director of The 1917 HIV/AIDS Outpatient Clinic. Dr. Raper received the “UAB School of Nursing Visionary Leaders Award,” in 2010, was inducted into the Nursing Hall of Fame in 2009 and received the ” American Academy of Nurse Practitioners State Award for Excellence in Care” in 2007. Dr. Raper’s dedication and commitment has and will continue to improve the lives of a vulnerable population group.