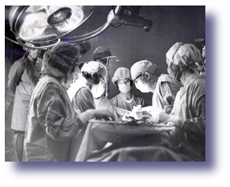 As professor of surgery and department chairman at the University of Mississippi in the turbulent 1960s, Dr. Hardy stirred controversy of his own when his surgical team transplanted a chimpanzee’s heart into the chest of a dying man in 1964. The organ, which beat for 90 minutes, preceded by four years the first human heart transplant, which occurred in 1967. Noted surgeon Dr. Thomas Starzl transplanted a human liver also in the early 1960s, and stated that at the time he and Dr. Hardy were “absolute pariahs in American surgery.” Dr. Hardy performed the first human lung and kidney auto-transplants in the world. He also performed the first adrenal auto-transplants in the United States.

As important as his achievements in the world arena, he taught his students and residents to think on their feet. “That ability was the mark of a Hardy-trained resident,” said one of his graduates. Born at Newala, near Montevallo, he took his pre-med at the University of Alabama and his medical training at the University of Pennsylvania . A former president of such prestigious organizations as the American Surgical Association, the American College of Surgeons and the International Society of Surgery, he edited and wrote 23 books, and published more than 500 articles in medical journals.