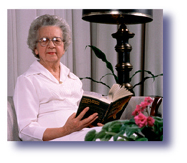 A 1926 graduate of the Birmingham Baptist Hospital School of Nursing, Mrs. Moffett was a symbol of compassion for the Baptist Health System for 73 years and a mentor to more than 4,000 nurses. She was Director of Nursing for the Baptist Hospitals from 1941-1967 and Chief of Nursing from 1967-70. Later, as Chief of Nursing Emeritus, she visited hospitalized patients well into her 80s, wearing her trademark starched uniform and cap. She always imparted her philosophy to both patients and students: “Nothing takes the place of the personal touch.” A national leader in nursing accreditation, she developed a core curriculum for nursing students in cooperation with the University of Alabama and led the effort to establish the university degree in nursing at UAB.

A former president of the State Board of Nursing, she developed the first licensed practical nursing program in Alabama and also began the state’s first two-year nursing program at Jefferson State Community College. The Sanford University Nursing School is named in her honor. Her legacy is that of a continuing role model for that very special calling, the nursing profession.