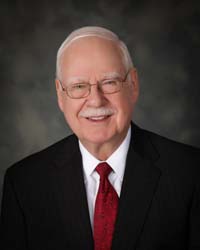 Dr. George C. Smith, Sr., a native of Lineville, AL, through his dedication to family practice, compassionate and nurturing care for his patients, and extensive involvement in organized medicine has become a legend. He received a pharmacy degree at Samford University, worked with the Eli Lilly Co., and then obtained the MD degree from the Medical College of Alabama followed by clinical training at Lloyd Noland Hospital in Fairfield. Dr. Smith has been active in a number of professional organizations including Clay County Medical Society, Medical Association of the State of Alabama (MASA), Alabama Academy of Family Physicians, and American Academy of Family Physicians.