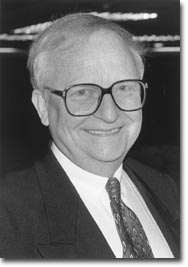 Dr. Frederick P. Whiddon was born in Newville, Alabama. He received a Ph.D., and later the honorary degree of Doctor of Letters, from Emory University. After serving in teaching positions at Emory and at Athens College, he became Director of the University of Alabama-Mobile Center. At the age of thirty three, he was appointed President of the University of South Alabama, at the time the youngest college president in the country.

Because of Dr. Whiddon’s distinguished record of service, in l965 he was selected the Outstanding Young Man of Alabama. In 1981 he was selected one of the Ten Young Men of America, and in 1988 he was chosen Mobilian of the Year. Through his leadership the quality of medical care was greatly advanced in south Alabama. This is evidenced by the development of the University of South Alabama Medical School and the expansion of the University Hospital. As a result, south Alabama has been able to attract some of the very finest physicians and healthcare professionals to the area.