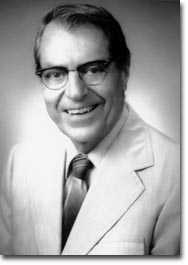 Dr. B. Franklin Jackson, Jr., was born in Clayton, Alabama, the son of an eye, ear, nose and throat specialist. He received his medical degree and internship training at New York University Medical School and Bellevue Hospital. His early private practice was interrupted in 1939 when he served as a U.S. Army flight surgeon. In 1946, Dr. Jackson, his father, and several other supporters founded a much needed not-for-profit hospital in Montgomery. Some 55 years later, the small frame houses have been replaced by new facilities housing advanced technology and patient services. Today with 379 beds and 375 active and courtesy physicians, Jackson Hospital has often been recognized for its quality care and compassion.

A skilled surgeon, Dr. Jackson has served as president of the hospital’s Medical Staff and Board of Trustees. His insistence on innovation, attention to detail, and excellence, were instrumental in the hospital’s growth and success. A long-standing advocate of wellness and an accomplished runner, at age 89 Dr. Jackson continues to serve on several advisory boards.