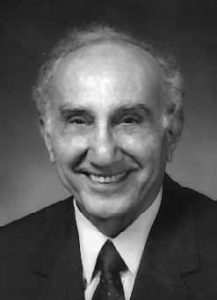 Dr. Ernest DeBakey’s general surgery practice in South Alabama spanned six decades and over 40,000 major surgical procedures. Recognized by his peers as one of the preeminent general surgeons in the Southeast, he never sought fame or recognition. A patient’s ability to pay was never a concern to him. Since his retirement in 1993, Dr. DeBakey has continued to help others. In the past seven years Dr. DeBakey has given millions of dollars to worthy healthcare causes including scholarships for residents and nurses.

Dr. DeBakey created a drug education program and “drug bus” that has reached over 20,000 grade school students. He donated over a million dollars to Mobile Infirmary for new facilities and equipment. During his distinguished career Dr. DeBakey served as mentor to many young medical students. Today this mentoring process continues through the Ernest G. DeBakey Charitable Foundation, established in 1977 to benefit medical research and education.