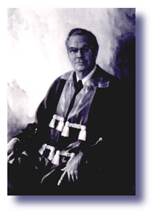 In a career that spanned more than 50 years, Mobile-born Edward Maumenee became one of the most famous names and towering figures of ophthalmology in the 20th century. Touching every segment of his profession, he made significant discoveries in the detection and treatment of retinal malfunctions, macular degeneration and several other eye diseases, including glaucoma, the leading cause of blindness.

As director of Baltimore’s famed Wilmer Eye Institute from 1955 to 1959, he was known as a dynamic leader, and also affectionately as “The Prof.” He generated endless ideas and set impossibly high goals for himself and his students, but could motivate others to perform on his level. At Wilmer he trained more academicians and future directors of departments of ophthalmology than anyone in the world. A 1934 graduate of the University of Alabama, he was also instrumental in the founding, of a nationwide system of eye banks. He chaired the national committee of the 24th International Congress of Ophthalmology in 1982.