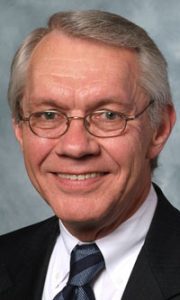 Donald M Ball, a graduate of Samford University, began his career in public accounting, before joining the administrative team at Baptist Medical Center Princeton as Vice President of Business affairs. In 1975, Mr. Ball was named Vice President-Finance at Jackson Hospital in Montgomery, Al, beginning a 30 year career, 23 of which were as President and CEO. During those years, the hospital experienced extraordinary growth in service to central Alabama including replacing the original physical plant with a modern and newly equipped building. While serving as Jackson’s CEO, Mr. Ball was elected to the Boards of Directors of Blue Cross-Blue Shield of Alabama, Mutual Assurance, Inc.(now Pro Assurance), Alabama Hospital Association, Hospice of Montgomery, Alabama Healthcare Hall of Fame, Montgomery Area Chamber of Commerce, Montgomery Area Committee of 100, and the Alabama Quality Assurance Foundation.

He has also served on the American Hospital Association House of Delegates and is a retired member of the American College of Healthcare Executives and the Healthcare Financial Management Association, among others. Mr. Ball was awarded both the Robert M. Coats and William G. Follmer awards by the Healthcare Financial Management Association and the Gold Medal of Excellence by the Alabama Hospital Association. Following his retirement from Jackson Hospital in 2005, Mr. Ball served as Chairman of the Noland Health System Board of Directors and President of the Alabama Healthcare Hall of Fame.