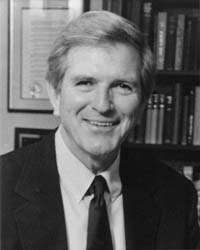 Dr. David Mathews established a record of outstanding vision and leadership as he worked to advance healthcare in Alabama and the nation. Dr. Mathews served as president of the University of Alabama between 1969 and 1980, and was voted one of the Top Ten Young Men in America by the U.S. Jaycees. Recognized as an outstanding educator, he was appointed by President Gerald Ford to serve as Secretary of the Department of Health, Education, and Welfare. Among his many responsibilities as a cabinet member he served as chairman of the President’s Committee on Mental Retardation, member of the Board of Governors of the American National Red Cross, and Trustee of the National March of Dimes Foundation.

Dr. Mathews has held the position of president of the Charles F. Kettering Foundation since 1981 and has steered the foundation’s research toward studying the role of the public in our political system. Nonpartisan and nonpolitical, Kettering’s research focuses on how to make democracy work as it should. Dr Mathews has written widely on such subjects as southern history and international problem solving.