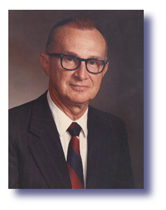 D.O. McClusky has distinguished himself in the areas of hospital pharmacy, hospital administration, and community leadership. A 1937 graduate of Howard College (Samford University), Mr. McClusky began his career in hospital pharmacy at South Highlands Infirmary in Birmingham and quickly rose to assistant hospital superintendent and chief pharmacist. Later, Mr. McClusky served for over three decades as administrator of Tuscaloosa’s Druid City Hospital and led it through a period of tremendous transformation as it grew from 74 beds to 700 beds. Mr. McClusky served as President of the Alabama Hospital Association and was recipient of its first Gold Medal of Excellence Award.

From a field of 7,000 administrators, D.O. McClusky received the 1976 American Hospital Association’s top honor, the Distinguished Service Award. He was recognized as Distinguished Alumnus of the McWhorter School of Pharmacy at Samford University in 1998. A state and national hospital leader and the founder of the Alabama Healthcare Hall of Fame, Mr. McClusky has also served his community in many ways including President of the Tuscaloosa Chamber of Commerce.