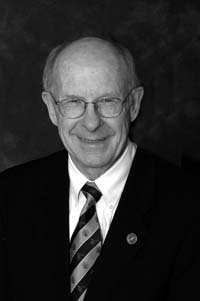 Dr. Carden Johnston has distinguished himself with a record of outstanding service to children’s medicine in the state of Alabama. A 1961 graduate of the Medical College of Alabama, he has served the Children’s Hospital of Alabama since 1975, and currently serves the UAB School of Medicine as Emeritus Professor of Pediatrics. A noted speaker, Dr. Johnston is widely known for his award winning NBC health and safety news segments called “KidCheck”. This health education program is now distributed to over fifty stations nationwide.

As a physician volunteer he has delivered health and education services in the Dominican Republic, St.Lucia, and India. Dr. Johnston has served as president of both the Alabama and American Academy of Pediatrics, and as president of the Council of Medical Specialties Societies. Among his many honors, Dr. Johnston has received the Outstanding Achievement Award from the American Academy of Pediatrics and the Wallace Clyde Outstanding Service Award from Children’s Hospital.