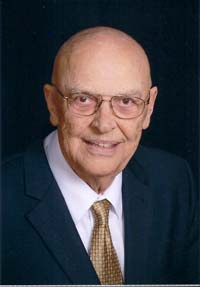 Dr. Ben Branscomb’s career forever changed the practice of medicine across the globe. In 1948, he contracted tuberculosis and spent more than two years at the Saranac Lake TB Sanatorium. While there he began studying lung disease and subsequently became the first pulmonary physician at the National Institutes of Health. At the time, lung disease was categorized as part of cardiology and it was Ben Branscomb who helped establish pulmonary medicine as a separate specialty. Dr. Branscomb was recruited to the faculty of UAB by Dr. Tinsley Harrison. He taught thousands of doctors and cared for thousands of patients at UAB over almost 50 years.

At UAB he performed many of the early studies to prove that emphysema was a disease and that cigarettes damage the lung. He realized that the only way to challenge the misconception that cigarettes were innocuous was through public education. Shortly after the American Lung Association equipped him with a bus to do lung testing and education, he arranged for Senator Lister Hill and Alabama Congressman Roberts to invite him to come test the US Congress. To do so, Dr. Branscomb had to invent and build the first portable spirometer. Through his pioneering work Ben Branscomb described the pulmonary flow volume loop physiology, helped garner national acceptance of emphysema as a disease, and had a major impact in combatting air pollution in Alabama. As the only physician on the Alabama Air Pollution Control Board, he was instrumental in temporarily shutting down the polluting steel furnaces in Birmingham after convincing the State to implement the new Clean Air Act. Dr. Ben Branscomb is truly one of the great teachers and founders of modern medicine. His insights and discoveries have immeasurably advanced the health of the public. All of health care today stands on the shoulders of this giant.