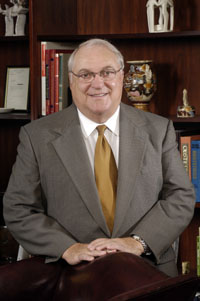 Dr. LoBuglio, renowned administrator, researcher, mentor, and clinician, directed the University of Alabama at Birmingham Comprehensive Cancer Center, for 20 years and then remained on its research staff for another decade. This Center under his leadership recruited outstanding faculty, increased extramural funding almost 10-fold, developed a robust translational therapeutics program, facilitated multi-disciplinary research, and mentored prominent medical scientists while attaining national and international prominence. Dr. LoBuglio, recruited from the University of Michigan in 1983 as Director of the Center and the Division of Hematology/Oncology in the Department of Medicine, had training at Georgetown University, University of Pittsburgh, Harvard Medical School, and Boston City Hospital.

His expertise in immunological therapeutics resulted in a number of approaches that are now part of routine clinical care. He served on many local and national committees and boards and received numerous honors and awards for his contributions to medical science, cancer, biology, and patient care. He was president of the Association of American Cancer Institutes. Awards by the University of Alabama at Birmingham include President’s Medal in 1993 and Distinguished Faculty Lecturer in 1995. He was designated a Health Hero by the Birmingham Business Journal in 2004.